Biogas Production – Where Nothing goes to Waste

As the world comes to terms with the reality of climate change, the drive to replace fossil fuels with sustainable alternatives and the need to stop generating waste is now imperative. Reduce, reuse, recycle – it’s a mantra that we’re all familiar with.

The race is on to see data centres powered cleanly and sustainably, with backup power systems that are also driven by renewable power. What, however, if unused waste – such as food waste and farm slurry – could be harnessed to provide a constant source of power, as well as a variety of useful by-products?

And what if the infrastructure to generate the power could be sited close to data centre campuses, and use waste products (such as heat) from the facilities to assist in their operations?

Biogas – a rough 60/40 split between methane and carbon dioxide with traces of oxygen and other gases – is produced through the process of anaerobic digestion. A biogas plant – like the Biocore facility in Co Roscommon in Ireland – is fed by waste products such as food waste and farmyard slurry, although it can use ‘energy crops’ such as maize and beets.

A by-product of power generation is heat, which transforms what’s left after the anaerobic digestion (AD) process into a high-quality fertiliser ideal for use in agriculture.

If destined for the national gas network, the carbon dioxide that remains after ‘cleaning’ the gas is liquefied and supplied to the food industry for carbonating drinks and producing dry ice.

Biogas generation is a virtuous cycle waste is exploited for the gas it can produce, the gas feeds into the nation’s gas supply (and its by-products into the industrial food sector), and spent waste is dried (using excess heat) to become a valuable resource for agriculture. Nothing is left unused.

Equally importantly, while unburnt methane (CH4) is a greenhouse gas when it is burnt it gives off more heat and light than its hydrocarbon equivalent and results in lower carbon emissions.

A 2MW biogas facility, processing 50,000 tonnes of feedstock every year, produces enough gas to power 3,000 homes (the equivalent of 6 wind turbines) and biogas production, combined with wind and solar, is contributing to the transition away from fossil fuels.

Ireland has yet to fully embrace the potential of biogas like, for example, Denmark, where the waste from the pig-farming industry feeds large biogas generating operations.

This situation is changing but the state appears slow to appreciate the possibilities presented by biogas, paying missed target fines rather than investing money in developing new ways of meeting those targets.

Clearly, biogas production is not a silver bullet. The energy provided by these facilities is more expensive than traditionally generated energy. But it is reliable, it is clean and it is sustainable.

Much has been said about on-site sustainable power generation as a part of a data centre’s development plans – wind, solar and AD. This is not to power the data centre itself, as the energy demands of the new hyper-capacity facilities are beyond that, but (amongst other, local and community uses) to provide charge to large-scale battery storage to supplant diesel-powered backup generators.

The idea of co-locating an AD facility on a data centre campus makes a compelling case for itself, particularly where data centres are based in rural locations with greater site availability. The data centre supplies heat for the AD process and the biogas is used by CHP generators to feed the battery arrays that provide backup power. 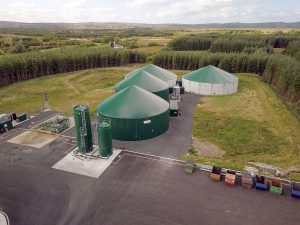 As part of this quasi-circular environment, the heat produced by the generators cycles back to the AD facility to dry the feedstock digestate into fertiliser products for supply to the agriculture sector.

Biogas and data centres: further opportunities and the future

Future possibilities for the relationship between biogas facilities and the data centres sector hinge on advances being made in fuel cell technologies. In 2018 a fuel cell was developed in a laboratory that could be powered by methane (rather than hydrogen) and operated at a (relatively) low temperature of around 500 degrees – cooler than the operating temperature of an ICE.

Innovations such as these could see biogas produced by AD powering data centres directly, without the need for generators. They could also see biogas being used as a sustainable fuel for the next generation of electric vehicles and becoming an established fixture in a low-carbon, renewable future.

To read an expanded version of this article, download the Echelon report “Data Centres 2021 – Power and Influence” or listen to our Podcast.